WEATHER FOREAST: SUNNY WITH A CHANCE OF GLOBAL PANDEMIC.

We left Quebec on March 10th on our way to Bishop, California. We had been planning this trip for months and it promised to be idyllic. Four of us were leaving: three Allez Up employees - Lyla, Jay and I - plus Étienne, who had joined our trio in January. At the time we obvioulsy had no idea of the magnitude of the events to come. The health crises of the new coronavirus was not quite global yet: Europe was beginning to understand the seriousness of the situation, but North America had seemingly been spared. This was before a state of emergency was declared in the United States and Canada, before the borders were closed. When we arrived in Bishop, it was easy to forget about the global pandemic, or at least brush it aside as a minor distraction. Spring was already well underway in California, the sun was shining on the desert, climbers had swapped down jackets for flowery shirts, and Bishop seemed like a small haven amidst growing global concerns. Little did we know that in the weeks to come California would announce one of the first stay-at-home orders in the country and we would no longer be welcome. 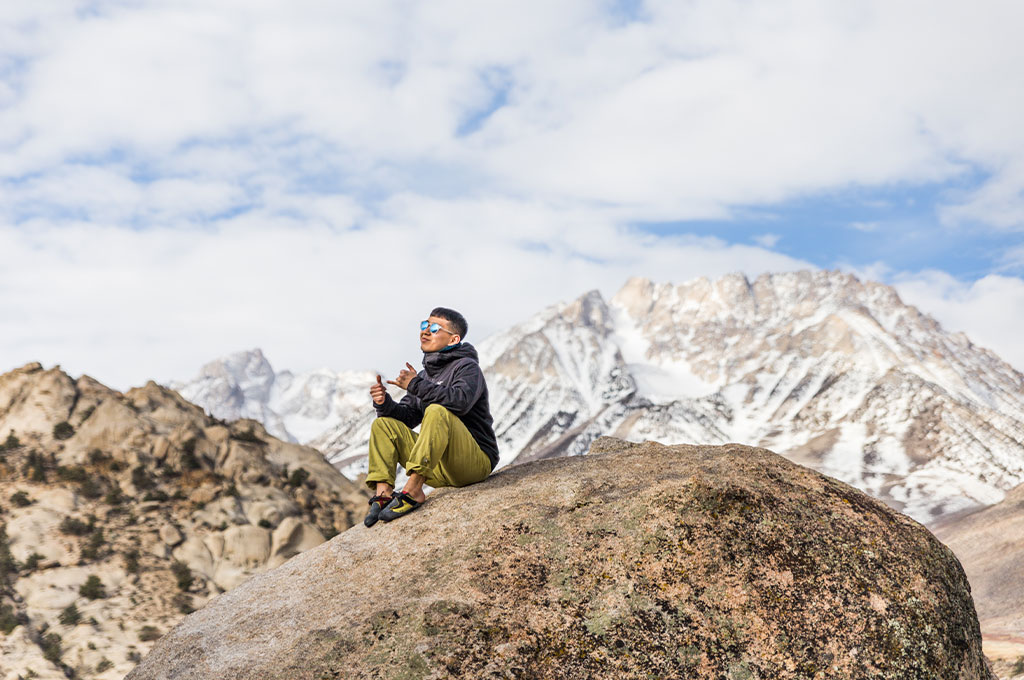 The first days started with exploration. We had spent several weeks watching every climbing video we could. Seven Spanish Angels, The Hulk, Soul Slinger, the list of projects was endless and we didn't know where to begin. We started with THE must-see sector: the Buttermilks. You've most likely seen pictures of its two most famous residents: Grandma and Grandpa Peabody. These two huge boulders at the entrance of the sector set the tone for the rest of the climbing in the Buttermilks. Don't expect  many lowballs and be prepared to revisit what you consider to be an "average" height for your boulders. The climbing is quite intimidating, but the flat landings allow for relatively safe falls.

We couldn't have asked for a better first day: perfect weather, incredible climbing, a crowd of friendly people and a first V9 send for me. As if that wasn't enough, some friends who were climbing in Mexico came up to Bishop to spend a few weeks with us. It was easy to forget the bits and pieces of news about the contagion that made their way to us all the way out in the desert. The atmosphere was still festive. 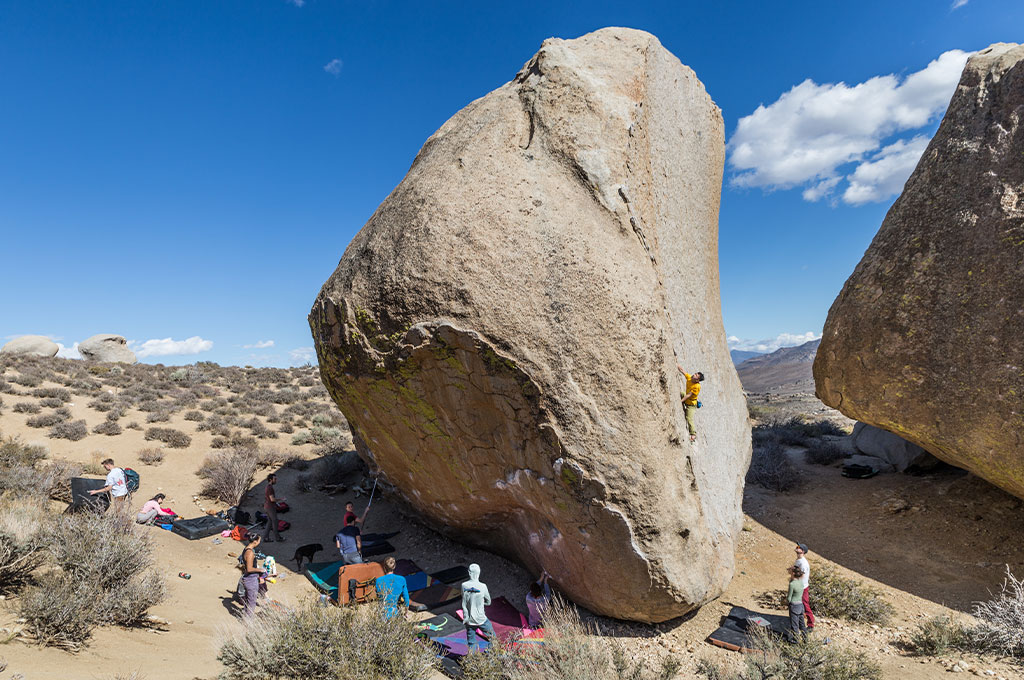 A few blissful days went by like that before a strange atmosphere settled between the boulders. No more gathering around the first pile of crash pads that came along, you could barely talk to other climbers without feeling a little uneasy. As soon as another group would drop their stuff close to us, some excuse would come up and we would subtly slip away to avoid any contact. A silence that would normally be welcomed with pleasure began to stifle a trip that was meant to be simple and light-hearted. A state of emergency had just been declared in the United States and Canada. Calls to return home were becoming increasingly urgent, social media was rapidly turning into a battlefield, and the news was getting worse every day. Overnight, Bishop almost completely emptied. Despite all the articles in outdoor magazines denouncing the influx of climbers to the country's major climbing sites, the parking lots that were overflowing when we arrived were now home to only a handful of cars each day. The confinement, which may have initially been seen as an ideal holiday opportunity for some was obviously taken seriously. Even our friends, who were meant to continue travelling for several more months, decided to shorten their adventure and return to Quebec as quickly as possible. So what were we still doing there?

"A silence that would normally be welcomed with pleasure began to stifle a trip that was meant to be simple and light-hearted."

That's a good question. We asked it almost every day. It's important to note that "normal" life continued much longer in Bishop than in Quebec or in the more urbanized areas of California. There were no reported cases of coronavirus in our county or in any of the surrounding counties, and the locals did not seem to care much about the emergency measures in place. Despite the gradual disappearance of the climbers, the town of Bishop had not changed much. Of course, we tried to reduce our visits to town to the essentials, practice social distancing and not take unnecessary risks when we climbed, but as long as our planned return to Quebec was not in question, a hasty departure seemed exaggerated. 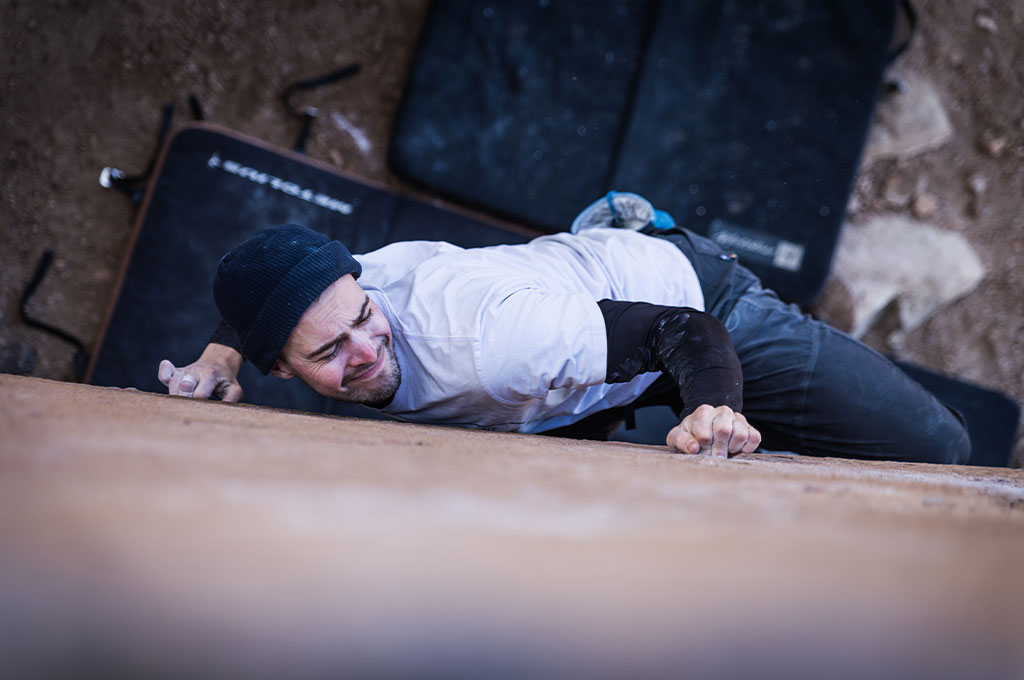 Étienne Gaucher on Mr. Witty, a great classic of the Happy Boulders. Photo by Maxime Banel.

"The police patrolled as far as the Buttermilks."

This status quo did not last long. As all non-essential businesses began to close, it became clear that our presence in this small town was becoming more difficult to justify with every passing day. First and foremost was the glaring lack of food in the grocery stores: no more eggs, no more canned goods, there was not much left of anything. For every item we bought, I felt as if I was depriving the local community of a few more resources. There was also the issue of the availability of hospital services. Climbing carries its share of risks. Even if we do our best to avoid them, they never completely disappear. Bishop's small hospital, when hit by the COVID-19 epidemic, would have had a hard time taking care of a climber who broke their leg in a bad fall or an overzealous spotter with dislocated wrists. We were also beginning to feel a growing pressure from the locals. We didn't feel welcome anymore. Every day there were articles about the exasperation of the locals about the presence of "tourists" in their small town in these times of crisis. But the pressure wasn't only felt between the pages of newspapers and magazines. There was no one around the boulders, the few souls we came across stayed around their vans, probably their only residences, the police patrolled as far as the Buttermilks and calls to ban access to the main climbing sites in the region were coming from all sides. The more Bishop emptied out, the less we felt like we belonged. Even the climbing had taken on a bitter taste, no longer offering any real satisfaction. 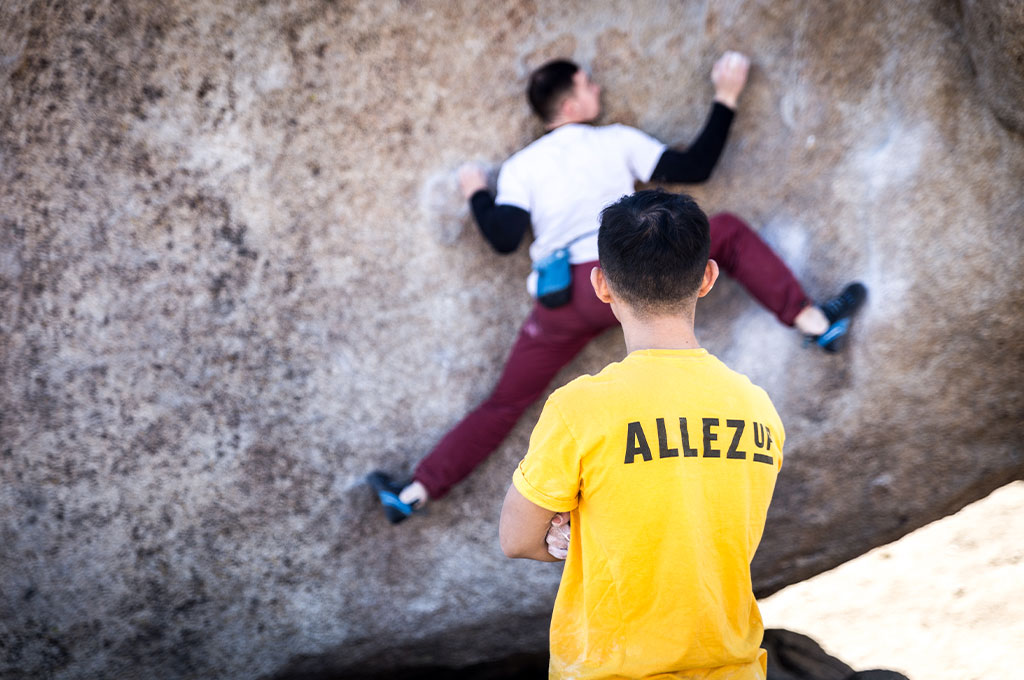 Any occasion is good for advertising. Photo by Maxime Banel.

We had a decision to make: stay and hope that the situation didn't get too much worse before our planned return date - and risk getting stuck in the United States - or try to reschedule our flight and forget about the rest of the trip. Given the circumstances, the second option prevailed. That left us with the question of whether we should go through San Francisco as planned. The city had quickly become an epicenter of the contagion despite the containment measures in place. We were not tempted to go back, but the alternative (buying a new plane ticket from another airport), in addition to lightening our wallets by a few hundred dollars, was logistically impossible. After an unsurprising first flight cancellation, we headed to San Francisco in an almost supernatural atmosphere. Stillness on the road, no traffic jams, and no one apart from a few trucks. Things were going almost too well. Once we arrived at our destination, same scenario: while the streets were bustling with activity a few weeks earlier, an eerie calm was now hovering over the city. It wasn't quite empty, but the few passerby were walking fast, avoiding each other and exchanging little more than a furtive glance. The airport was completely deserted. These huge buildings, usually swarming with activity, gave our brief passage an apocalyptic feel now that they were completely abandoned. Most of the security checkpoints were closed, probably due to lack of personnel. Never has a trip through the airport been so easy. Our plane was only filled to 10% of its capacity. 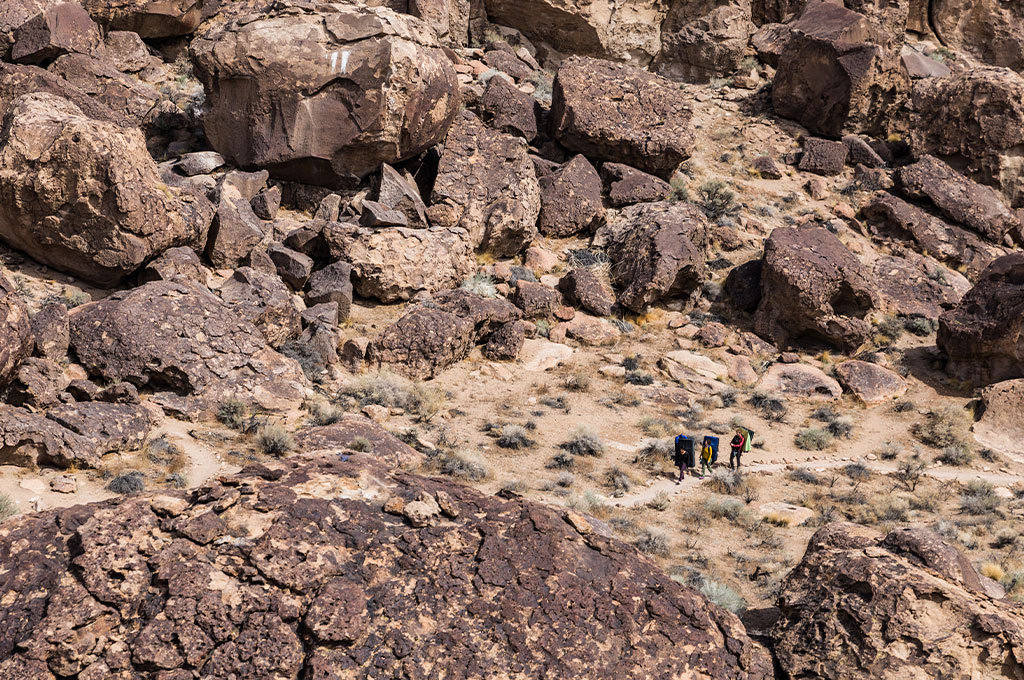 A few climbers at the entrance of the Happy Boulders. Photo by Maxime Banel.

Would we have cancelled this trip if we had known in advance what was going to happen? It's hard to say. Without our firsthand experience of this epidemic, it would have been very difficult for us to understand the extent of the situation that is unfolding right now. Even now, comfortably sitting in my home after fourteen days of quarantine, I don't think I can fully grasp what happened in Wuhan, or what is still going on in New York. To say that I could have expected this a little over a month ago would be impossible. Right now, I'm trying to take advantage of this forced rest and think about what happened to us. I'm not going to try to find lessons to learn from this story, but I think it's still crucial to remember some basic principles of our climbing practice. When in doubt, we need to listen to the locals. We need their support if we want to continue to be able to climb there. When police start patrolling between the boulders and calls to ban climbing become commonplace, it may no longer be time to climb. We should not let our passion for climbing take over our reasoning. Climbing may be incredibly important to most of us, but when its practice becomes problematic, we must know how to put it aside. Whatever happens, the boulders of the Buttermilks and elsewhere are not likely to disappear before our next trip and our isolation will certainly not get the better of our passion.

" Climbing may be incredibly important to most of us, but when its practice becomes problematic, we must know how to put it aside."